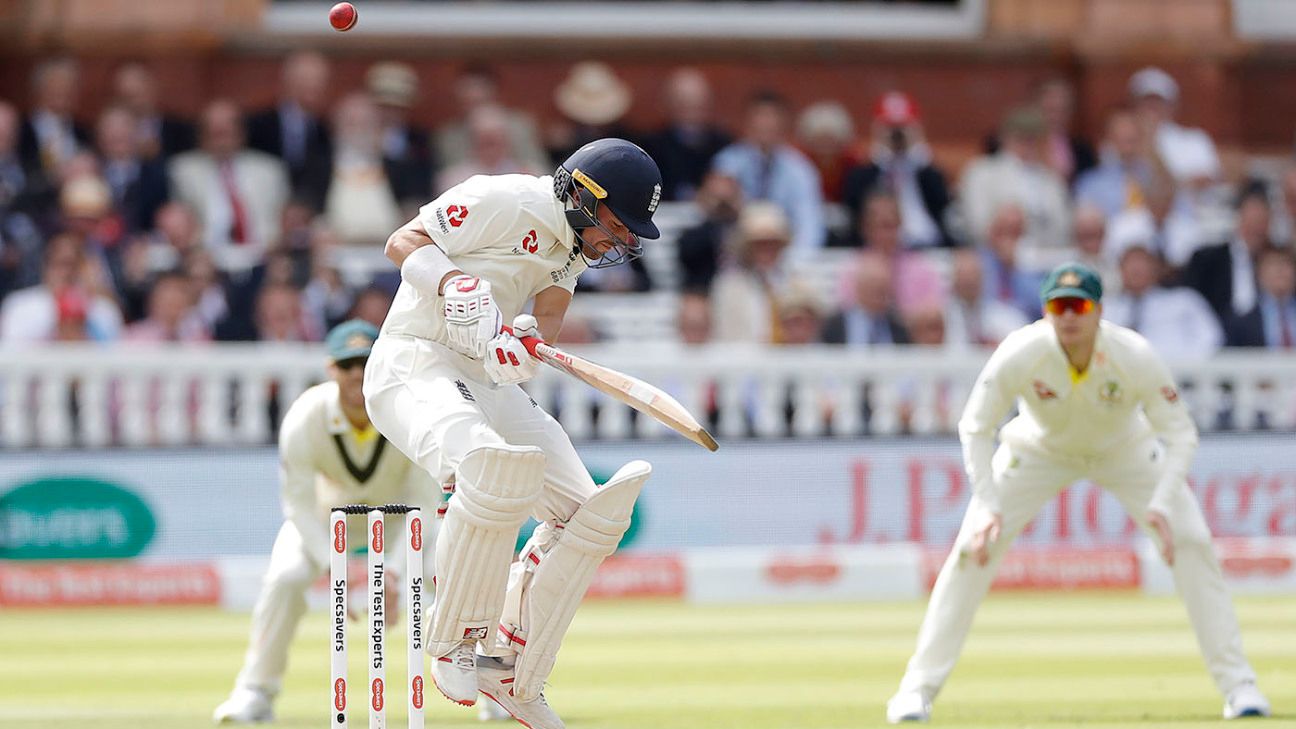 Rory Burns believes that Jofra Archer will be looking forward to dishing out some of the medicine that he and his fellow tailenders received on the first day of action at Lord’s, after being welcomed to Test cricket by a fiery onslaught from Pat Cummins.

Archer, who cranked his pace up past 92mph in a promising but wicketless six-over burst before stumps, was on the receiving end from ball one of his Test career, as Cummins went short with ten of his eleven deliveries, before finally having him caught off a leading edge in the gully for 12.

And he was not alone in being peppered by a pumped-up Cummins, with Burns himself taking two blows in the space of three deliveries before fencing another lifter in his subsequent over to short leg, where Cameron Bancroft clung onto a brilliant one-handed take.

“It’s always nice to get into a little bit of a scrap,” said Burns. “Obviously he got two to hit the same spot, which was nice, but I was just trying to getting amongst it and tough it out.”

Burns added that he had been warned from the very start of his innings what was in store for him, but put that down to the fact that, with 197 runs from 472 balls in the series to date, Australia are starting to think about ways to extract him from the crease.

“I’ve obviously batted a few balls so far in this Test series, so they’re looking at different ways of getting me out,” he said. “I think Nathan Lyon ran past me this morning and mentioned it within about three balls, so I was well versed in what I was looking at, and prepared for what I was getting. But it’s just a good battle isn’t it?”

“It’s quite an obvious tactic, what they’re doing, so the boys are preparing for it. And luckily we can dish out some of our own in this game as well. We’ve got some boys in our armoury that do the same things, so it should be pretty interesting.”

Lyon, who claimed not to remember his early warning to Burns, admitted that he too was bound to be in Archer’s sights, and joked that it wasn’t a prospect that he entirely relished.

“But it’s Test cricket. That’s why we play it, and for me personally, I want to challenge myself against the best players in the world. And these guys are the best bowlers in the world. So even though I can’t bat I’ll go out and give it a go, unless you want to do it for me!”

On the match situation, Burns admitted that England would have fancied a higher score after getting first-use of a good Lord’s pitch, but believes that their total of 258 puts them firmly in the contest.

“It’s tight, isn’t it?” he said. “I think it’s a competitive total but there’s probably a sense of disappointment there at the same time. But it’s kept everyone interested all day, because it seamed and If they missed their length you’ve been able to punish it. And it’s just started to offer a little bit to a spinner too, so I think it’s game on, and we’re right in amongst it.”