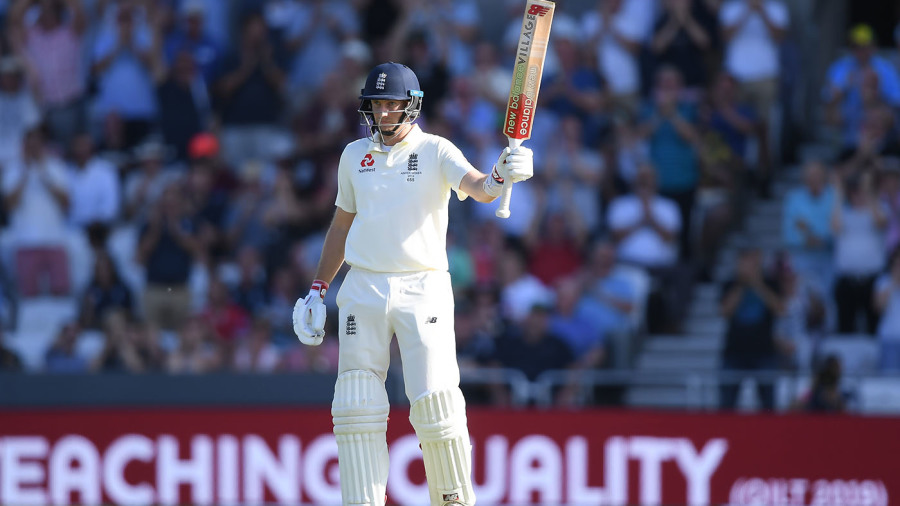 Josh Hazlewood beat Joe Root‘s bat by a lick of paint with a ball that buzzed outside off stump just inside the last hour of yet another dramatic day of this Ashes series. The hint of a smile at the corners of Root’s mouth spread into a nonchalant grin as he eyeballed the fast bowler who was following up his leather-bound assault with a little verbal one.

The pair were locked in battle, just as their respective sides were, playing out a scene that had seemed so very unlikley just hours earlier at the start of play on day three of the third Test at Headingly.

Root and Joe Denly – two England batsmen needing big scores as much as any – had dug in and turned the match on its head, a recurring theme in a series that has seen momentum swings , twists and turns throughout. The pair put on a 126-run partnership, Denly reaching his second Test fifty, and Root unbeaten on 75 at the close.

The 67 all out England coughed up in their first inings had heaped more pressure on England’s batting lineup and these two hadn’t escaped – far from it. Questions swirled over the influence Root’s role as captain and his move one place up the order to No. 3 was having on his battting performance and Denly was struggling to establish himself as a Test player in his sixth match.

But the pair came together after England had stumbled again to 15 for 2 in their second innings chasing a lofty target of 359, set when Australia resumed on 171 for 6 and Marnus Labuschagne, who was not out on 53, proceeded to reach 80 and top score for the tourists for the third time in as many innings as he guided them 246 all out.

In reply, England lost thier openers cheaply, Rory Burns to a Hazlewood delivery he should have left but which he prodded to David Warner at first slip and Jason Roy to a gem from Pat Cummins which zeroed in on off stump. It looked like Australia, who lead the series 1-0 would have retained the Ashes by the end of the day.

But some dogged batting from Root and Denly frustrated Australia’s bowlers, as demonstrated in that exchange between Hazlewood and Root, which didn’t end there. Hazlewood followed up immediately with another ball that beat Root’s bat moving away slightly off the seam, and then a length ball that had the batsman shouldering arms and copping another earful.

It was an intense and important spell from Hazlewood, who had taken 5 for 30 in England’s first innings. Nathan Lyon kept Denly on his toes in the next over, with a big appeal for a catch at short leg which came off the pads, an appeal to the DRS for leg-before which was sliding down and an attempted run out – all of which Denly survived.

Hazlewood struck on the third ball of his next over though, pummelling Denly with a short ball that hit the glove and looped to Tim Paine behind the stumps. Denly had faced 134 balls for his 50 and 21 more without adding to his score but he had produced an innings sure to boost his confidence and secure his place for now, his delicious pull through midwicket off Hazlewood for four midway through the second session one for the highlights reel.

Likewise, Root went a long way towards answering his critics after scoring consecutive ducks in his previous two innings with his 57 at Edgbaston his only knock of note in this series before now. He is still far from Mark Butcher’s unbeaten 173 which allowed England to chase down 315 against Australia at Headingley in 2001, but the England captain will have his sights set on producing something special at his home ground.

Denly’s exit brought in Ben Stokes, who scored fifty in the first Test and was Man of the Match with an unbeaten 115 in the second, bolstering England’s hopes this time around.

Australian skipper Paine, in trying to keep his troops’ pumped up late on the third day, yelled from behind the stumps: “We’ll get two more tonight boys, two more in the morning”. They didn’t get the former. They will need the latter and much, much more.

Will Alabama fans make an Auburn coach their next senator?
Fantasy Picks: Kane Williamson over Virat Kohli as captain
Garin beats Delbonis to reach Rio Open quarters
Faf du Plessis gave his all to South Africa – but he couldn’t take anymore
Aaron Gordon and his new kicks are ready for the dunk contest