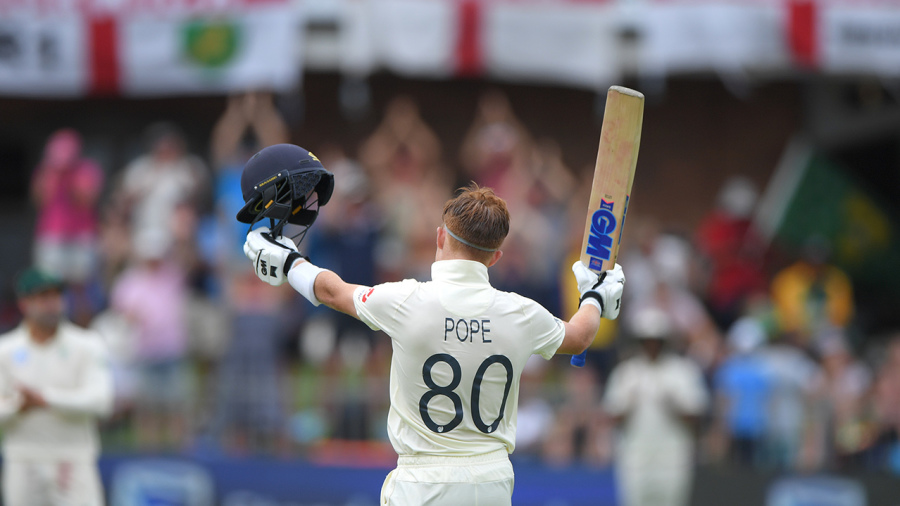 Ollie Pope scored a maiden Test hundred to follow the latest demonstration of Ben Stokes‘ immense value to the England cause as South Africa were backed into a corner in Port Elizabeth. The tone was set by England’s fifth-wicket pair during the morning session and followed up with some lower-order humpty, allowing Joe Root to declare – having also un-declared – in pursuit of wickets amid the evening gloom at St George’s Park.

Although South Africa responded with their second consecutive fifty stand between openers Dean Elgar and Pieter Malan, there was time for Dom Bess to strike twice before the close. With plenty of runs in the bank, signs of spin from the surface and Mark Wood also pushing the speed gun up to 150kph/93mph, England walked off in the belief that they had the tools to crack the Test open in pursuit of a series lead.

South Africa had reached 50 without loss when Bess coaxed an error from Malan, who tried to come down the pitch but only managed to chip a return catch. Zubayr Hamza then fenced unconvincingly at an over of short-and-nasty stuff from Wood, before popping a catch to short leg via his inside edge. The return of the rain, which had delayed the start by 45 minutes, presented them with an escape route.

The first part of the day saw England’s middle order flex its muscles in a manner not seen for a long time. By the time Stokes and Pope had done adding 203 – the second-highest fifth-wicket stand for England against South Africa in Tests – the home bowlers had been thoroughly pounded into this unforgiving surface, but there was further pain to come as Sam Curran and Mark Wood cut loose before the declaration. A total of 499 for 9 was England’s highest since the 2017 Edgbaston Test against West Indies.

There was nothing surprising about Stokes taking centre stage, however. Despite having to battle through at times on the first day, having survived numerous scratchy moments – including a tough chance to short leg on 10 – he resumed his innings in a more recognisably bullish frame of mind. Twice was Maharaj battered on to the grass banks at deep midwicket, as Stokes accelerated past his junior partner towards a ninth Test hundred (and third against South Africa).

When he moved to 95, via another slog-sweep off the spinner, he became only the seventh man to have scored 4000 Test runs and taken 100 Test wickets. A few overs later, off his 174th ball, came a punch through the covers to take him to three figures, the achievement acknowledged with a crooked-fingered salute in recognition of his father, Ged Stokes, who remains in hospital after being taken ill over Christmas.

He had been ably supported by Pope, who cut, pulled and drove with what is quickly becoming customary elan to move past 50 for the third time in as many Tests. However, a ball after Stokes reached his century, Pope was given out lbw off the bowling of Dane Paterson; although a review saved Pope and extended Paterson’s wait for a first wicket on debut, the realisation of what was at stake seemed to interrupt the England man’s fluency.

Pope spent 53 balls moving from 74 into the 90s, losing Stokes and Jos Buttler in that time – the former giving Paterson some relief by carving to backward point, before Buttler chipped tamely back to Maharaj. Pope survived a close stumping chance off Maharaj on 84, but Sam Curran helped take some of the pressure off, cracking along to 44 off 50 and scoring three-quarters of the runs during a stand worth 59.

Suddenly Pope was freed up once again, scooting through the 90s to reach three figures in his sixth Test – at 22 and 15 days the youngest Englishman to score a Test hundred since Alastair Cook. The landmark achieved, he was able to have some fun against a tiring attack, bringing out the uppercuts and reverse-ramps as England drove home their advantage; a glove behind off Rabada on 106 going unnoticed as South Africa began to unravel.

Wood, too, geared up for his bowling return after 11 months out of the Test side by throwing the bat around to good effect, five times clearing the ropes – although he was the beneficiary of a bizarre episode on the way to 42 from 23 balls. A slog against Rabada was taken at mid-on, with Root then signalling his men in, only for the umpires to review and find that the delivery should have been called for a front-foot no-ball. Root gleefully reversed his call, with Wood extending their ninth-wicket happy-slap to 73 in 8.4 overs before Maharaj finally put a stop to the antics.