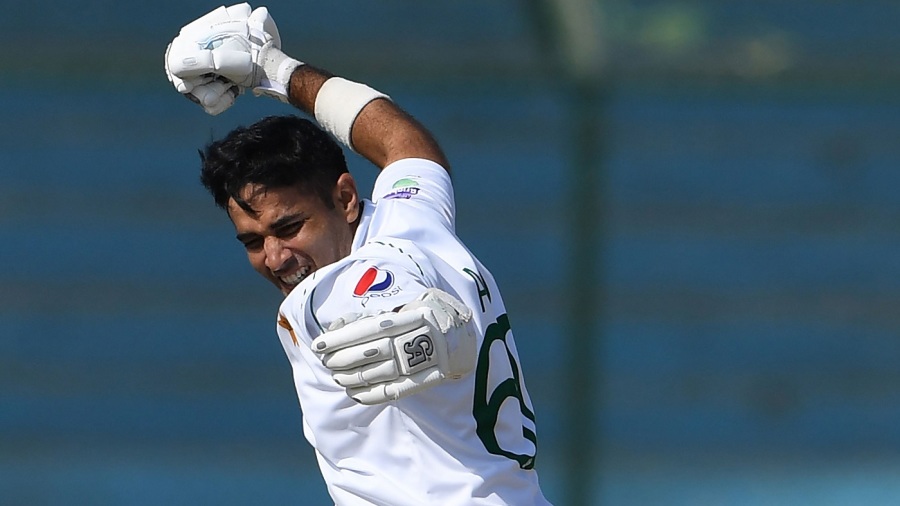 This is what you’re supposed to do to an opposition at home. In Rawalpindi, Pakistan had had a day of batting dominance, but that was in an innings that had no bearing on the result.

In Karachi, Pakistan have imposed themselves emphatically on Sri Lanka, subjecting them to day-long toil and dragging them to a near-hopeless match situation, while they expand their own batting averages and put up feel-good performances after a harrowing away tour.

It was Abid Ali who drove the Pakistan cause most relentlessly, through the course of his 174 off 281 balls, never letting the visitors settle against him. His chief sidekick was Shan Masood, who struck 135 himself – his second Test hundred, the first having also been against Sri Lanka. Together, the pair put on 278 for the first wicket, which is the second-highest opening stand in Pakistan’s history. Their partnership formed the spine of a 338-run day. They lost only two wickets, and now have a lead of 315.

In the early morning, there was a little movement, but not for long. Left-armer Vishwa Fernando bowled a probing spell first up, but once Abid and Masood fought their way through that, they did not have to contend much with lateral movement. The bounce that had envenomed the seamers in the first innings was in short supply as well. But the skill with which Abid, in particular, attacked loose balls after the first 30 minutes helped set the tone for the day. He pounced on a full delivery on his pads from Fernando and sent it whistling through midwicket in the seventh over of the day. Soon after, he dropped back and latched on to a short ball from Lasith Embuldeniya, sending it down to third man for four. Two balls later, he slog swept him for another boundary for good measure.

Masood was less confident, at least twice getting thick edges to fall in the gap between the slips and gully, and repeatedly having himself beaten outside the off stump. The momentum Abid was creating, however, helped pave Masood’s own path and eventually he started playing big shots as well. The first six of the day came when he stepped out to Dilruwan Perera and launched him over long-on. Together they struck 12 fours and three sixes in the morning. Pakistan’s total skipped along at 4.54 per over in that session.

After lunch, the pitch seemed even flatter, and the two batsmen progressed smoothly to their centuries. Abid tickled Embuldeniya to fine leg – the spinners having now switched to a leg-stump line – to move to his second triple-figure score in as many matches. Only eight batsmen had previously hit hundreds in each of their first two games. Masood reached the milestone a few overs after that, off the 148th delivery he faced. Neither changed their approach after getting to their tons. They were just as watchful in their defense, and just as happy to wait for the hittable balls.

It helped that by this stage, it had become clear that both Sri Lanka’s spinners were struggling. Dilruwan, who came into this Test with a 2019 average of 89.4, was unable to get significant turn, and seemed the least threatening of all the visiting bowlers. Embuldeniya could not quite replicate the turn and bounce that had enabled him to take four wickets in the first innings. With no seam movement on offer, Vishwa was modest as well. It was effectively down to Lahiru Kumara to produce all the opportunities.

As the day wore on, it felt as if the bowlers were tiring at a faster rate than the batsmen, but Kumara did manage to eke out the wicket of Masood just before tea, having him caught on the legside boundary with a bouncer that rose more sharply than the batsman had expected. Abid, though, batted on unconcerned, crossing 150 and putting on a further 77-run stand with Azhar Ali. He had survived one lbw in the day, but was eventually trapped in front by an angled Kumara delivery that would have crashed into middle and leg. He had hit 21 boundaries and a six in his innings. After three Test innings, his average sits up at 160.5.

Late in the day, Azhar took advantage of an excellent surface and exhausted bowlers to make a half-century – his first in 2019, after 11 innings. He had Babar Azam for company at stumps. Although both Abid and Masood had outstanding ovations from a Karachi crowd roughly 8000-strong, they saved their loudest chants for Babar’s entry to the field.