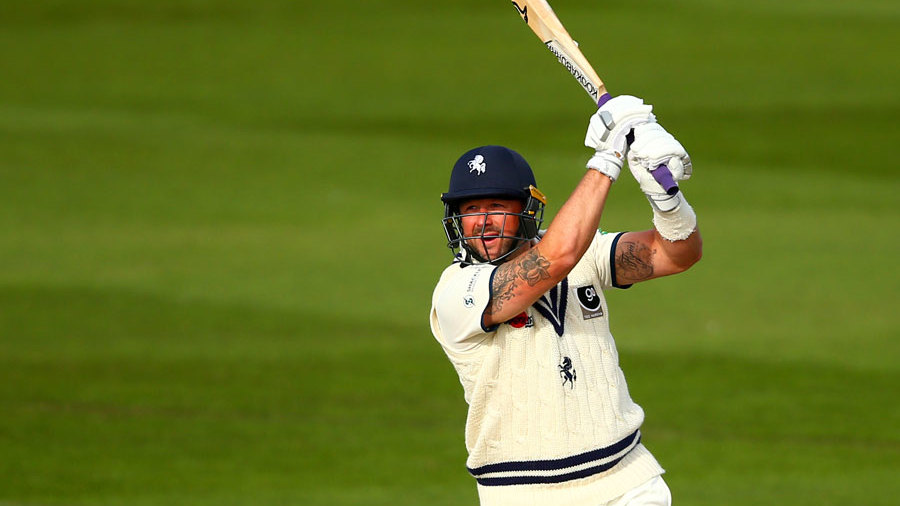 Derbyshire have rejuvenated so many ageing cricketers over the decades that they must presumably have a season’s pass at Tissington’s holy wells where Peak District locals have reputedly given thanks for their health since the Black Death largely by-passed the parish nearly 700 years ago.

Darren Stevens had time for only four matches at Derbyshire this summer after gaining a temporary release by Kent for the Vitality Blast, in the knowledge that Kent will release him permanently at the end of the season, but he wore his 43 years lightly at Trent Bridge as he produced the innings that might just have confirmed Nottinghamshire’s slide back into Division Two.

Sore eyes, gout and rheumatism are among the more modern ailments likely to be suffered by the locals as they dress the wells with flowers in an annual ritual. Stevens, ambitious to gain a player-coach role next season, would be reluctant even to admit to a twinge of batsman’s back or bowler’s shoulder. On this evidence, he won’t need to.

His brusque intervention changed the course of a day in which the Indian offspinner, Ravi Ashwin, threatened to put Notts on top on an accommodating surface. At one point, Ashwin had 4 for 35 off 17 overs. Fifteen overs later, after Stevens had pummelled 88 from 90 balls, Ashwin had 4 for 120 and his mystique had been somewhat diluted.

A young sprog experiencing his first taste of county cricket or a revered India international with 65 Tests to his name: to Stevens they all come much the same, he likes to feel bat on ball. He took 54 runs off Ashwin in 40 balls, including two sixes, one soaring over long off to announce his arrival, the second a slog sweep over midwicket, dragged from outside off stump.

Considering that he had made only one Championship half-century in 14 innings this season, even Stevens would be keenly aware that not too many opportunities will present themselves to add to his 33 first-class centuries.

He was 86 when Kent’s ninth wicket fell, standing hand on hip at the non-striker’s end as Harry Podmore edged a rising ball from Paul Coughlin to slip. Coughlin, Notts’ third seamer in a match where they are fielding two spinners, was in the mood for an aggressive finale. Stevens essayed a cumbersome back-away-and-swish. In Coughlin’s next over, on 88, he made solid contact but was caught by Jake Ball on the cover boundary.

Notts, so optimistic when they began the season, with a trio of new batsmen to show off, have had a dismal summer. Eight defeats and three draws are the sum of 11 matches have left them 42 points adrift of the second-bottom side, Warwickshire. Only one county will be relegated this season because of a divisional restructuring which might enable them to prolong the agony until they face Warwickshire in their penultimate match at Trent Bridge next week.

In the meantime, the coach Peter Moores tells many of his batsmen more attuned to white-ball cricket (and in Alex Hales’ case tuning in to nothing else) that there are no short cuts to Championship success – something the likes of Stevens, whose training regime has never wavered, knows only too well.

In response to Kent’s 304, Ben Slater survived 12 overs in which Notts reached 35 for 2. Ben Duckett was protected for the morrow by the stalwart nightwatchman Luke Fletcher, who had also bowled with commendable gumption. Joe Clarke, the most gifted of those new signings, was omitted against Kent, to follow his exclusion from the side that beat Middlesex in the Blast quarter-final and has had the sorriest summer of all.

Ashwin must have anticipated much better after returning from 12th-man duties during India’s recent two Tests in the Caribbean. He had two wickets by lunch, 18-year-old Jordan Cox lbw on the back foot to end a patient stay in only his second first-class match and Sam Billings inside-edging onto his pad to be caught at first slip in the final over of the morning.

Kent then subsided to 119 for 5 as Ashwin had Daniel Bell-Drummond stumped by Tom Moores and produced an excellent arm ball to bowl Ollie Robinson. But the resistance begun by Heino Kuhn was then continued by Stevens.

Marcus O’Riordan, an offspinner on his first-class debut, scored a dozen before falling to Liam Patterson-White’s slow left-arm, and Coughlin finished with three tail-end wickets – his first at Trent Bridge – to bring hopes that he can now put his injuries behind him.

Stevens even enjoyed an intervention with the new ball, having Jake Libby lbw with his sixth delivery and running in with three slips and five men on the single. It was the 499th first-class wicket of his career. He has 34 at 22 this season, rushing towards his prize after 23 years of grunt work.

If he has helped to send Nottinghamshire down, it would be much to Derbyshire’s taste in a summer where they have also reached Finals Day in the Blast and will be hankering for the chance to face their most illustrious neighbours in the final at Edgbaston on September 21.

Edmund beats Seppi to win New York Open title
Kyrie replaces Pau as a VP of players’ union
How the Seattle NHL franchise is bringing hockey to everyone
Wilder at heart: The tallest tales about the heavyweight champ
Halep survives scare to make Dubai last 16