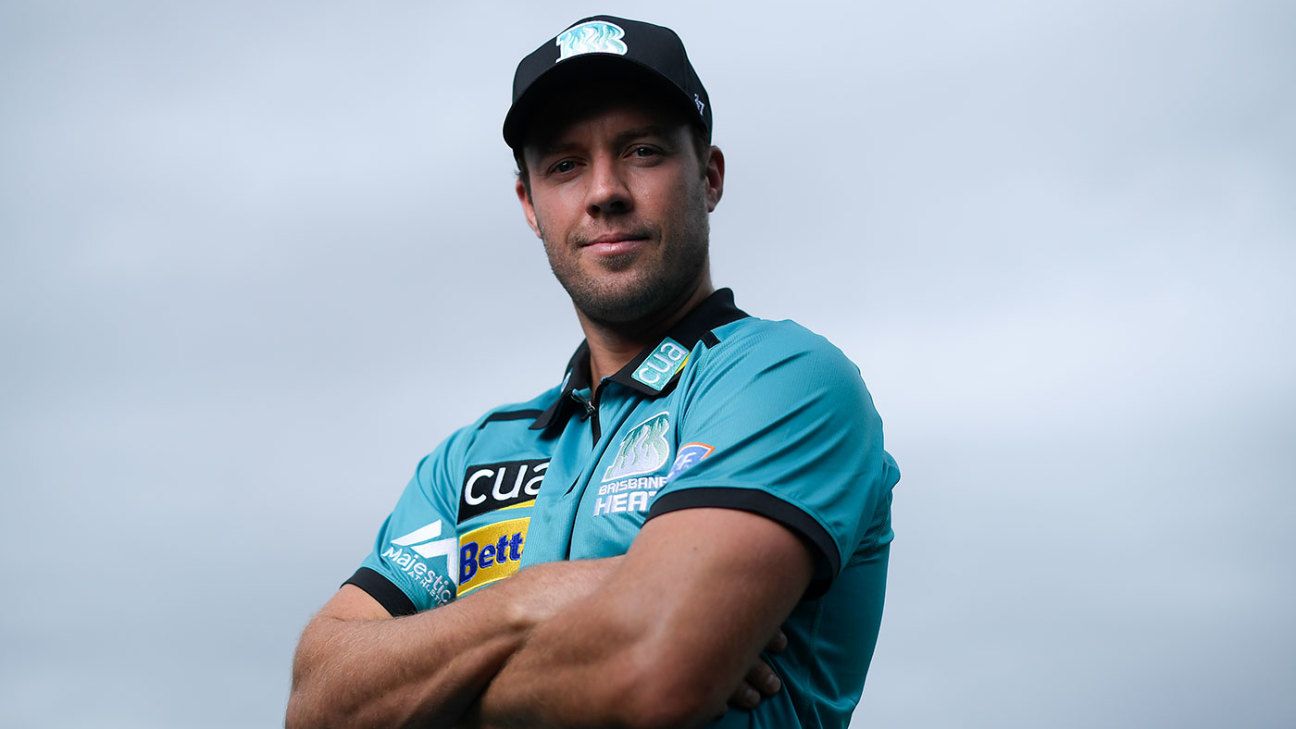 AB de Villiers has arrived in Australia for his long-awaited Big Bash stint with the Brisbane Heat feeling in some of the best form of his career and ready for the “big role” he has to play on and off the field.

De Villiers replaces Tom Banton for the latter stages of the tournament with the Heat currently fifth in the table, having four wins and four defeats from their eight matches.

It was a lengthy process to bring de Villiers to Australia with the chances of the signing having seemingly slipped away until the deal the was agreed in early October.

De Villiers joins on the back of 325 runs at 46.42 and a strike-rate of 152.58 in the Mzansi Super League for Tshwane Spartans, who finished runner’s up.

“I had a fantastic tournament in South Africa, had a few good knocks, felt in some of the best form of my career so hopefully we’ll see more of that in this tournament,” he said the morning after arriving in Brisbane ahead of his first match against the Adelaide Strikers on Tuesday.

Even with so many matches behind him – 304 in all T20s – de Villiers admitted he still gets butterflies but believes that is a good thing and is ready to embrace a broader role with the Heat.

“I’ve said it many times before, wherever I play around the world, whether it’s a club game or a World Cup semi-final, I feel the same pressure when I go out to bat,” he said. “I’ve always got that pressure I put on myself to perform at the best of my ability. I’ve done it so many times, it doesn’t guarantee success but I know what to expect, I know the butterflies are a good sign generally.

“All I can do is go out and enjoy myself, make sure I have a good influence on my team-mates and make sure I have an impact on the game with bat in hand. Then there’s the fielding and the off-field stuff, I have big role to play as an individual and not just a cricketer.”

The Heat captain Chris Lynn has urged team-mates to make use of every moment de Villiers is with them as they hunt for a place in the knockouts in what has so far been a topsy-turvy tournament.

“Experience is everything, there were a couple of games where we needed that experience so to have him is just gold,” Lynn said. “We’ve got a young team and the guys are mad if they aren’t like a sponge over the next few weeks.”

“It’s a natural role for me,” de Villiers said. “I’m 35 and have played quite a bit of cricket around the world. I’d hate to think that I won’t have that kind of role. I had a similar role in South Africa. I enjoy guys asking me questions about my batting. Like to think we’ll help some of the youngsters understand what’s needed to achieve success.”

Where de Villiers bats is yet to be determined with the Heat needing to reshape the order now that Banton has departed, but it is likely to be at No. 3 or 4. All eyes will be on the team if de Villiers and Lynn are at the crease together for any length of time. “It could be interesting,” de Villiers said. “I don’t know what to expect to be honest. I’ve a feeling it’s going to work and will be nice to watch.”

Lynn, who was a key part in long project to get de Villiers to the Heat, was in no doubt of his standing. “In my opinion he’s probably the No. 1 entertaining batsman in the world. When he gets going he hits the ball 360 degrees whenever he wants. I believe he’s two steps ahead of the game compared to everyone else. I think he’s the best in the game and the way he thinks is totally different to other batters around the world.”