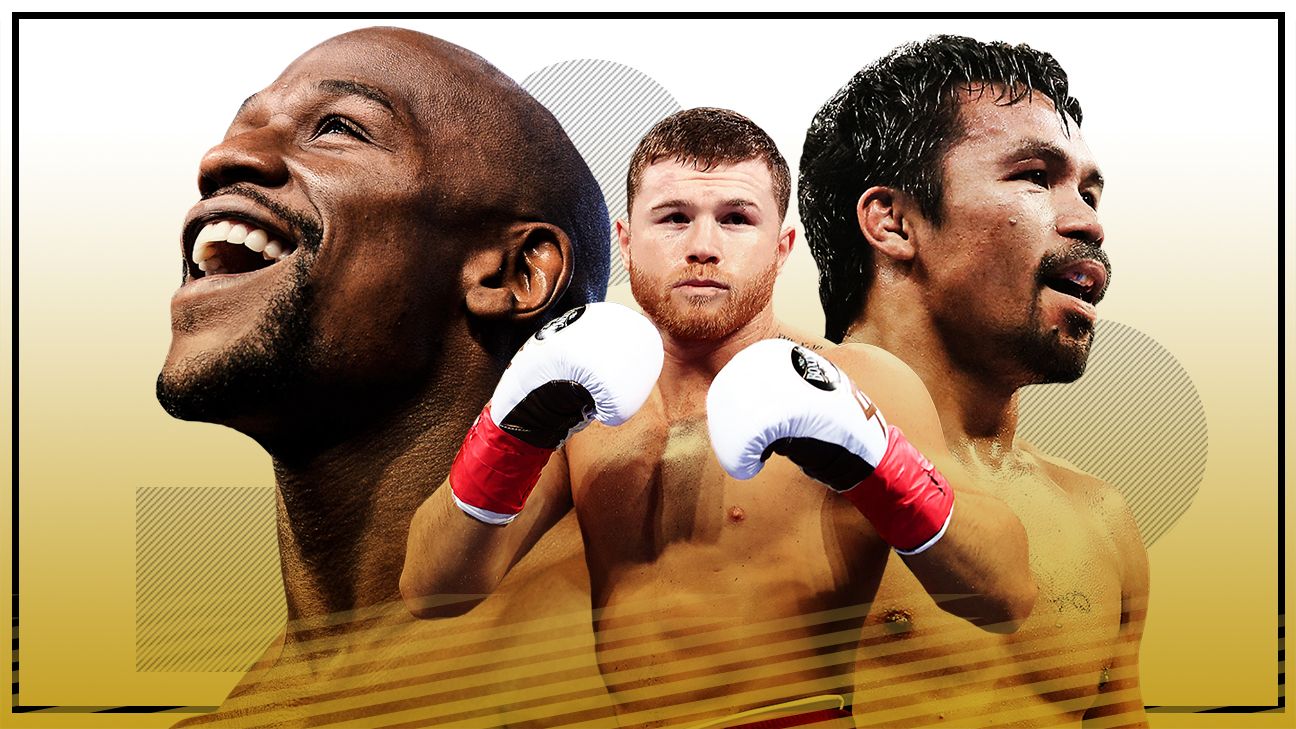 As we get to the end of another decade, we reflect on the fighters who helped define the past 10 great years in boxing.

There were three boxers in particular who made an impact from 2010 to 2019. One was a bright, young star in Canelo Alvarez, the four-division titleholder, current face of the sport and the highest-paid fighter. Within the decade, he has had the entirety of his career at a top level and has been in one massive fight after another. The other two, inextricably linked by their rivalry, are all-time legends Floyd Mayweather and Manny Pacquiao. They also dominated the previous decade and continued to have huge fights the past 10 years, including their colossal showdown in 2015.

Floyd Mayweather began the decade by defeating future Hall of Famer “Sugar” Shane Mosley. He ended his run in 2017 by stopping MMA superstar Conor McGregor in one of the most watched pay-per-views in history. In between, Mayweather boxed just eight times. Yet no other fighter impacted the sport — both in and out of the ring — the way he did.

It isn’t often that someone can perform on average just once a year and yet have such a strong case as one of the fighters who defined the decade. During the 2010s, his appearances became less frequent, yet the magnitude of his events became heightened.

In 2012, Mayweather scored an entertaining decision win over Puerto Rican star Miguel Cotto. A year later, Mayweather outclassed a young Canelo Alvarez. In 2015, Mayweather finally faced Manny Pacquiao in a fight that was too long in coming to fruition. It was a lackluster affair that over-promised and under-delivered, but Mayweather remained unbeaten with a decision victory.

While it would be fair to diminish the impact of the Pacquiao win, “Pacman” showed in 2019 that he is still a formidable fighter in his own right.

Now, you don’t often say that a boxer who had three years in a decade in which he was completely inactive (2016, 2018 and 2019) should earn this distinction, but ask yourself this: Name another pugilist with three wins of this quality on his ledger? Oh, and Mayweather defeated former junior welterweight world titleholder Victor Ortiz and Marcos Maidana (twice).

Mayweather was the premiere pound-for-pound boxer on the planet this decade.

Of course, if you’re talking about Mayweather, any discussion has to include the impact he made on the business of boxing. Starting with his 2013 bout with Robert Guerrero, he embarked on a landmark deal with Showtime that started to shift the dominance of the industry away from HBO. How many pugilists can say they are truly their own bosses?

Jay-Z once famously said, “I’m not a businessman. I’m a business, man.” This applies to Mayweather, who was an industry unto himself. There aren’t many boxers who were guaranteed more than $30 million per fight (as Mayweather was during his partnership with Showtime), and there are even fewer boxers who made eight-figure paydays possible for themselves. There’s a reason he called himself “Money.”

Whether you loved him or hated him, you cared one way or the other.

And it turns out, he might not be finished just yet.

As the decade began, Canelo Alvarez was a promising welterweight, perhaps a fighter who could become the next Mexican star.

As the decade comes to a close, Alvarez is, to many, the best pound-for-pound fighter in the world, already one of Mexico’s best fighters ever, a two-time fighter of the year (2015 and 2019) and the face of boxing.

In 2010, Alvarez was 19 when he appeared on the Floyd Mayweather-Shane Mosley HBO PPV undercard, and though he stopped Jose Miguel Cotto — Miguel Cotto’s older brother — in the ninth round, Cotto nearly stopped him in the first round. There were many questions about just how far Alvarez could go.

Those questions have long been answered, as Alvarez, now an in-his-prime 29, has become a megastar. He has been in several exciting fights, drawn huge crowds and shown big punching power, a great chin and vast improvement in his skills.

Having established himself as the pay-per-view king after Mayweather’s retirement in 2015, Alvarez, who makes millions outside the ring with endorsement deals, shook up the business of boxing in late 2018, when he left pay-per-view and signed a landmark five-year, 11-fight, $365 million deal with streaming service DAZN for what was then an all-time athlete record contract.

It has been an extraordinary run with one massive fight after another against high-profile opponents. Canelo beat Miguel Cotto for the middleweight title in one of the biggest Mexico vs. Puerto Rico rivalry fights in boxing history. He faced Gennadiy Golovkin twice in huge events, getting a controversial draw in the first fight and a tight decision win in the rematch. He knocked out Sergey Kovalev for a light heavyweight title in November after jumping up two weight divisions. He cleanly outpointed Daniel Jacobs to unify a pair of middleweight belts. He manhandled Mexican rival Julio Cesar Chavez Jr. in a shutout decision. He scored devastating knockouts of Amir Khan, James Kirkland and Carlos Baldomir. He also beat Erislandy Lara, Austin Trout and Mosley.

The one loss is certainly forgivable. It came in a junior middleweight unification fight with Mayweather, who forced him down to a catch weight of 152 pounds in one of the richest fights in boxing history. He doesn’t turn 30 until July and has a chance to carry on at the top of the sport well into the next decade.

Pacquiao is definitely a top-five all-time fighter. If he’s top-five of all time, he’s definitely a fighter who defined this decade. He has been a legend since he first stepped foot into a ring in 1995, and he is one of the most gifted athletes I’ve ever been in the ring with. Pacquiao is so good that his B and C games are better than a lot of guys’ A games.

Look at the past 10 years and the opponents he faced. Yes, he had a few losses, but they were in big events that helped bring boxing to many casual fans. A megafight with Floyd Mayweather, one of the biggest events in boxing history, a fourth fight with Juan Manuel Marquez to close out a great rivalry and against yours truly. We completed a great and memorable trilogy.

Pacquiao won 12 world titles in eight divisions. He’s a pay-per-view monster and commanded eyeballs anytime he stepped into the ring. When you think about boxing, you think about Manny Pacquiao.

I love him as a fighter, and I love his courage in the ring. Pacquiao was always willing to fight guys in their primes. It’s rare that a fighter actually wants to fight the best out there.

The two fights against Marquez this decade tell you everything you need to know about Pacquiao. Marquez was a guy who was always Manny’s equal, but Pacquiao had beaten him twice. Still, Pacquiao kept going back and revisiting that fight.

He was still like, “You know what? I’m ready to do it again. I want to make this decisive. I don’t want anybody to say that this guy beat me. I want to make this loud and clear.” The first one was a draw, and the second one was a split decision, and Pacquiao was determined to get a signature win over Marquez.

Pacquiao got a majority decision the third time around in 2011, but that still didn’t sit right. Then, in that fourth fight, Marquez had his number and knocked Pacquiao out in the 2012 fight of the year.

Pacquiao finally got his fight against Mayweather in 2015. He had been calling for a Mayweather fight for seemingly forever. Mayweather stalled him out and waited until he saw an advantage. That’s just what Mayweather did in his career: He waited until he saw a low end in a guy or a down slope, and then he went for it. We waited for that fight for five years, and once they got into the ring, Pacquiao was still the aggressor. Pacquiao lost, but the fight sold more than four million pay-per-views!

Surrounding that Mayweather fight were my fights with Pacquiao in 2012, 2014 and 2016. When I fought him, Manny was considered one of the best pound-for-pound fighters in the world, right next to Mayweather. I won a close decision the first time, and being in a fight of that magnitude against Pacquiao — a legend, an icon — and winning that fight and getting a lot of backlash, it got bad. It was all hell after that. He took over in the late rounds of the second fight and hit me with a different type of power in the third fight. He was just more cerebral, a different Pacquiao in the rematches.

The fight with Adrian Broner (a unanimous decision victory in January) showed you that he still wanted it. He was vicious. Keith Thurman was unbeaten, younger, bigger and stronger, but Pacquiao wanted it more (and defeated him by split decision in July). He still fought with the hunger he had when he was first coming up. Pacquiao still has that competitive nature. He still wants to be in there with the very best. He still wants to fight Errol Spence Jr., Shawn Porter and all these top-level fighters. He still has speed and power. He’s fearless. It’s hard to touch this guy.

There will never be another Manny Pacquiao. Guys such as Pacquiao come once in a lifetime.