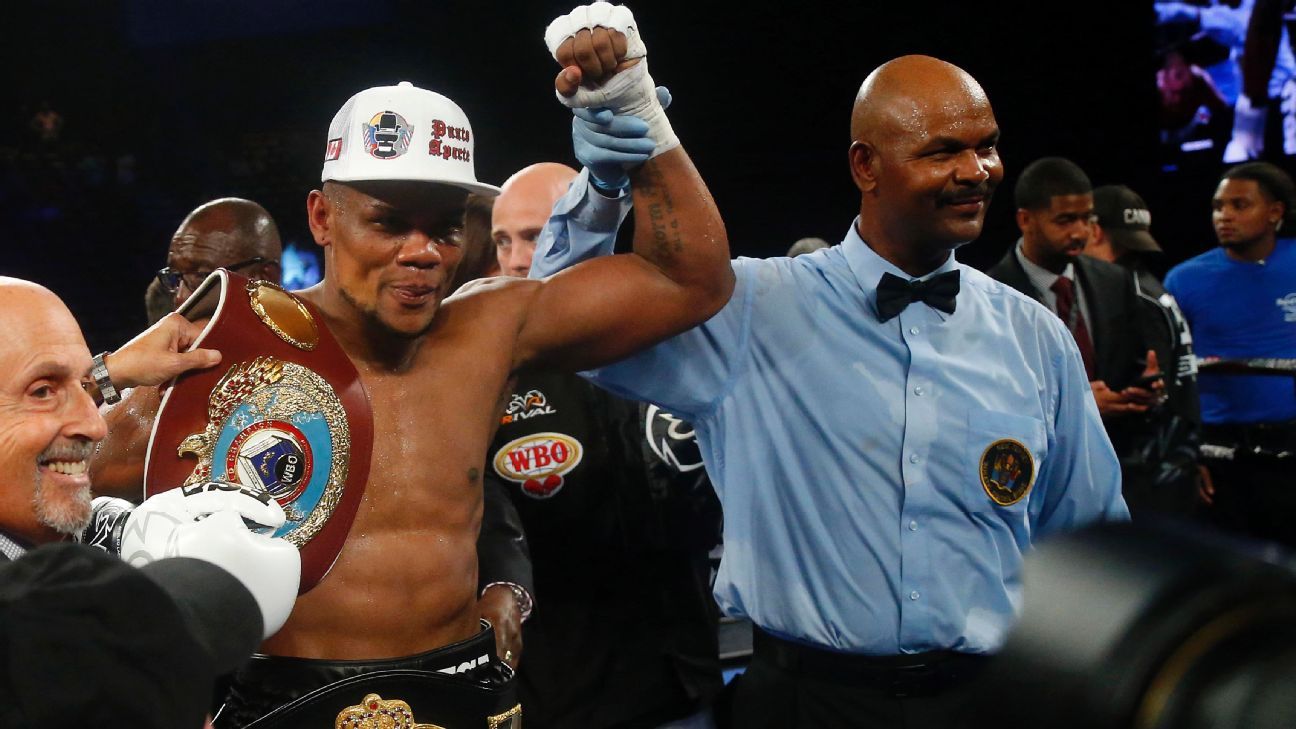 Trailing on all three scorecards, Eleider “Storm” Alvarez, not known for his punching power, went wild on Kovalev in the seventh round, knocking him down three times and stopping him to take his light heavyweight world title before a sold-out crowd of 5,642 at the Mark G. Etess Arena at the newly opened Hard Rock Hotel & Casino.

It was the first major fight in once-boxing-heavy Atlantic City since Kovalev’s dominant decision win to unify three world titles against Bernard Hopkins at Boardwalk Hall in November 2014, but this time he was on the other end of it, as Alvarez scored the impressive finish.

Kovalev was in control of the fight through six rounds and leading 59-55, 59-55 and 58-56. But everything changed dramatically in the seventh round, when Alvarez badly hurt and dropped Kovalev with a clean right hand to the head.

Kovalev got up quickly, but he was unsteady, and Alvarez rocked him with a jab and an uppercut. Moments later, Alvarez (24-0, 12 KOs) unleashed a combination, Kovalev hit the deck again, and the fight appeared over.

Kovalev (32-3-1, 28 KOs) made it to his feet, but he was out of it. When Alvarez blasted him with another left-right combination, he went down again, and referee David Fields immediately waved off the fight at 2 minutes, 45 seconds.

“Words cannot describe how I feel,” Alvarez said through a translator. “I want to thank God and all my fans in Canada and Colombia. This was all for them. It was a two-punch combination [for the final knockdown] that I have been throwing my whole career, and we worked on it in camp. I have always practiced that in camp, and we thought it would work in this camp.”

Alvarez, 34, was a 2008 Olympian from Colombia who moved to Montreal to launch his professional career in 2009

After the fight, Kovalev was taken to the hospital to get checked out.

“I feel OK. Thank you everyone. Thank you very much to all the fans around the world for your support,” Kovalev said. “I love you, and I’m fine.”

The fight got off to a slow start, with each man probing for an opening. Kovalev tried to land his powerful right hand, and Alvarez worked off the jab.

The 35-year-old Kovalev, a Russia native living in Los Angeles, continued to stalk the quicker Alvarez, who moved quite a bit side to side to stay out of Kovalev’s power range. But Kovalev did slip in a solid left hand to the head followed by a left to the body.

Kovalev had a big fourth round, landing several powerful combinations and hard jabs that rattled Alvarez and slowed him. While Alvarez was taking punches, he was also animated and talking to Kovalev during the round. Kovalev continued to press the action, and Alvarez emerged from the sixth round with a cut under his left eye that was apparently caused by an accidental head-butt.

Then Alvarez landed the big right hand in the seventh round that was the beginning of the end.

Main Events CEO Kathy Duva, Kovalev’s promoter, said he has the right to a rematch per his contract, but she was unsure if he would seek it right away. Although Kovalev was in control through the sixth round, Duva said she was still concerned.

“Sergey was way ahead, but I think he seems to gas out after six rounds,” Duva said. “That was the magic round with [Andre] Ward [in their first fight]. I assume he got tired.

“I was very happy with how the fight was going, but I kept saying to [Kovalev manager] Egis [Klimas], ‘Let’s get past the sixth round, and I’ll relax.’ But you saw what happened. I don’t want to take anything away from what Alvarez accomplished. Sergey was dominating, and Alvarez came back and stopped him. That was a pretty impressive accomplishment. Sergey was fighting brilliantly for six rounds, but he gassed out.”

After Kovalev lost his three light heavyweight world titles to Ward by controversial decision in November 2016 and got knocked out in the eighth round of the immediate rematch in June 2017, he fired trainer John David Jackson, with whom there had been much tension, to go with Abror Tursunpulatov. When Ward retired and vacated his titles last fall, Kovalev regained one of his old belts in his first fight back by knocking out Vyacheslav Shabranskyy in the second round in November.

Kovalev followed with a soft-touch defense against Igor Mikhalkin, whom he knocked out in the seventh round in March. But on Saturday, Kovalev found himself in the ring with a serious contender in Alvarez, who got the fight in April when original opponent Marcus Browne was dropped by Duva because of his arrest on a domestic violence charge.

Alvarez, of course, was thrilled to get the opportunity. He had been a mandatory challenger for world champion Adonis Stevenson since he outpointed Isaac Chilemba in 2015. But when that fight was delayed time and again, he quickly accepted the fight with Kovalev when it was surprisingly offered.

“As fight went on, I wanted to show that I could stay strong and do good things,” Alvarez said. “His punches were not as hard as they were in the beginning of the fight.”

Kovalev was being lined up for a unification fight with 175-pound world titleholder Dmitry Bivol (14-0, 11 KOs), 27, of Russia, in December. Their teams and HBO met about the bout on Saturday afternoon.

Bivol did his part, easily outpointing Chilemba (25-6-2, 10 KOs) in the co-feature, but Kovalev didn’t do his.

Now that the prospect of Kovalev-Bivol is down the drain, would Alvarez like to face Bivol to unify?