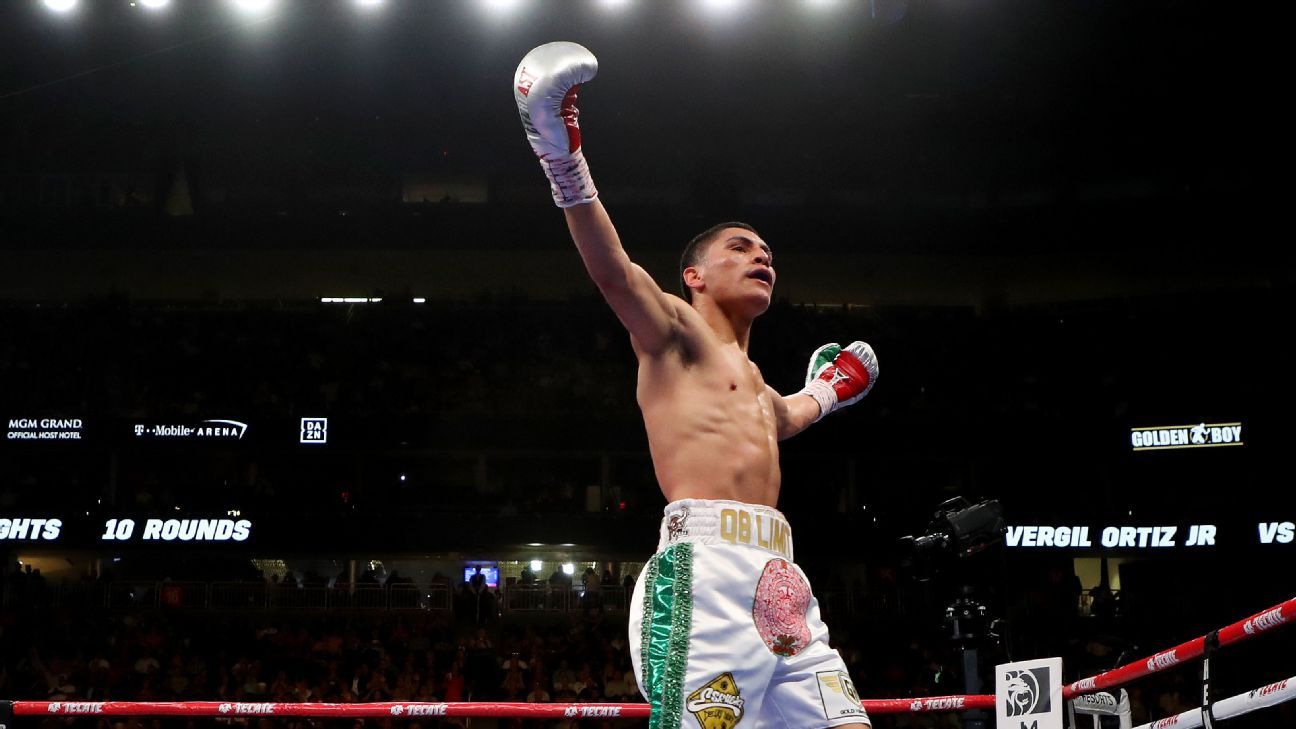 Vergil Ortiz continued his ascension as one of boxing’s young rising stars by stopping the experienced Antonio Orozco in the sixth round, in front of his hometown fans in Grand Prairie, Texas

This match-up for the 21-year-old Ortiz (14-0, 14 KOs) was considered a legitimate step up fight, given that Orozco (28-2, 17 KOs) was a junior welterweight contender for years, and last September gave unified 140 pound champion, Jose Ramirez, all he could handle over 12 back-and-forth rounds.

Tonight, he was stopped for the first time in his career.

While he had some moments versus Ortiz, Orozco was fighting an uphill batter from the beginning against the bigger, stronger, fast and younger foe. He was hurt badly in the first round by the hard-punching Orozco and nearly floored. At that point it looked like it was going to be a short night.

But after this quick start, Ortiz was pushed hard by Orozco, who backed him up along the ropes and wasn’t afraid to let his hands go. While he wasn’t necessarily winning these rounds, he had pockets of success in the third, fourth and fifth frames. Orozco was asking questions of Ortiz that had never been asked before.

And for the first time in his young career, Ortiz went into the sixth round. But instead of wavering, he shifted gears and began the round with an early barrage of punches, punctuated by a left uppercut that sent the normally durable Orozco down to the canvas. After rising to his feet, another series of punches had Orozco back on the floor.

To his credit, a weary Orozco got up and tried to gather himself for one last rally, but he was unable to hold off the oncoming onslaught of Ortiz and a finishing left hook knocked him down for the third and last time before referee Mark Calo-oy waved off the fight at 2:16 of the sixth.

Despite the emphatic finish, Ortiz was largely unimpressed by his effort: “I’m going to be honest. I don’t like the way I did in the fight. I don’t even know how many rounds we went, that’s how into the fight I was but the first three, four rounds, I could have done way better.

“I definitely have a long way as a boxer to reach that world champion status. But we’re going to keep making those improvements and we’re going to learn from this fight,” he continued. “I’ve been getting all these KOs, I’ve been saying that they haven’t been getting in my head, but as you can see in that first round, I got a little excited. Maybe I could have ended it, maybe not, but I had to force myself to slow down, and I’m just going to learn from this fight.”

No one can accuse Ortiz of judging himself on a soft curve. At the very least, this was a successful homecoming.

“Everyone knows that Grand Prairie is the grandest of all the cities in the world,” said Ortiz. “We have the best people, we have the best work ethic, we have the best kids that are going to grow up to be something one day. And I just want to set an example for each and every one of you guys, whether you’re kids, teenagers, or adults, you can do it if you put your mind to it.”

In what was another nip-and-tuck affair bantamweights Joshua Franco and Oscar Negrete continued their rivalry and, when it was all said and done, fought each other to another draw. In their previous to match-ups, they had fought to a dead heat back in October and it was Franco who came away with a disputed split decision victory in their rematch in April.

The third go-around was another closely contested bout. When it was all said and done one judge had Franco up 96-94 while another had Negrete on top by the same score. The 95-95 tally of the third ringside arbiter made this fight a draw.

You get the sense that if they fought a hundred times, you’d get a hundred fights where both men would believe they had done enough to win.

But the reality is that in three successive fights, spanning 30 rounds, neither Franco (15-1-2, 7 KOs) or Negrete (18-2-2, 7 KOs) ever truly separated themselves. While they are both active, busy fighters, neither of them are particularly heavy handed and many of these rounds were fought on even terms.

Naturally, both boxers believed they had done enough to get their hands raised in victory.

“I thought I pulled the fight off, I landed the better shots — again — and the better power punches,” said Franco, who hails from San Antonio.

Negrete believed that was a factor in the decision, saying, “They have a great fighter here in Texas but the fact that it’s in Texas indicates why we have the result that we have.”

As for a fourth chapter between the two, both Franco and Negrete have differing perspectives.

“Nah, I may move on to something else or see what happens,” said Franco.

While Negrete stated: “For right now, to be honest, I want to see what my promoter has to say but if he wants to fight, let’s do it, I’m right here.”