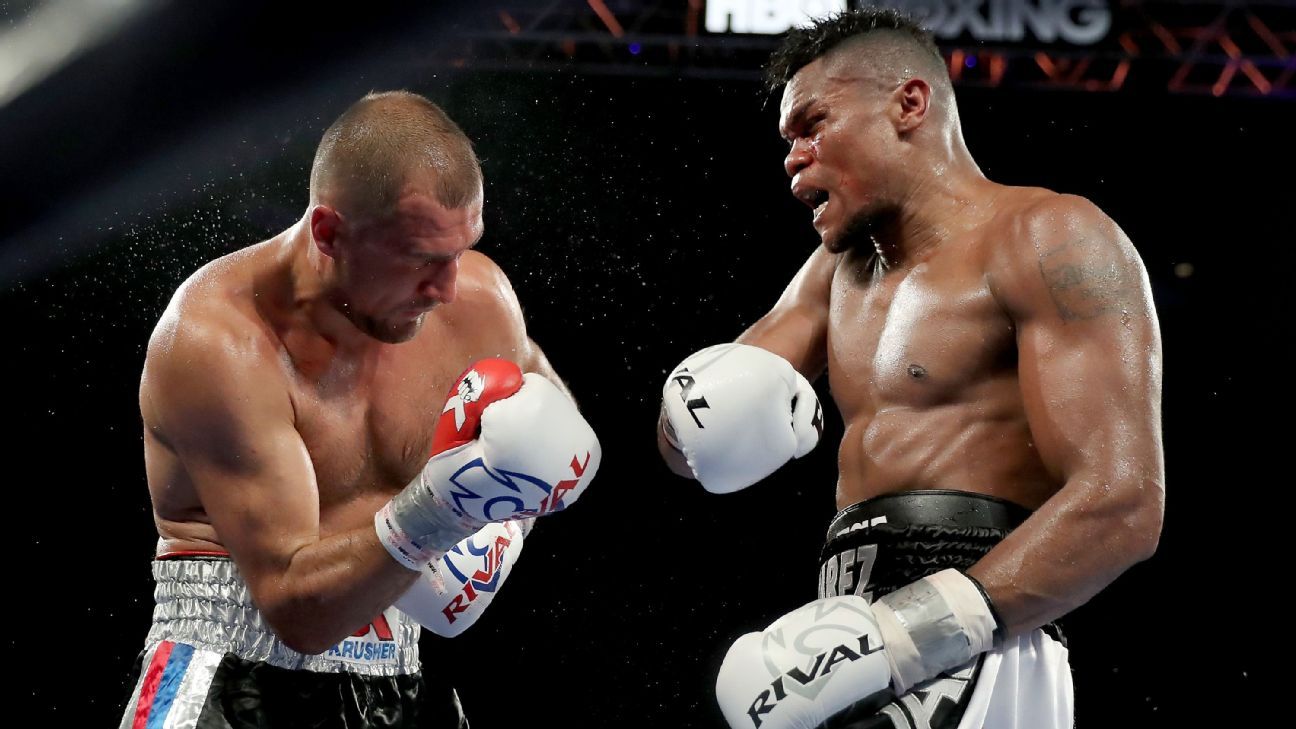 The scene was ideal. A sold-out crowd of 5,642 had packed the Mark G. Etess Arena at the newly opened, beautiful and bustling Hard Rock Hotel & Casino on Saturday night for the return of big-time boxing to Atlantic City, New Jersey, for the first time in nearly four years.

Light heavyweight world titleholders Sergey Kovalev and Dmitry Bivol were defending their belts in the two HBO bouts for what was supposed to be their final steps toward a Dec. 8 unification bout. Bivol was fighting on his third Kovalev undercard in his past four fights and a Kovalev-Bivol fight was something many wanted to see.

Bivol (14-0, 11 KOs) cruised past sturdy gatekeeper Isaac Chilemba (25-6-2, 10 KOs) for a bit of a boring and uneventful one-sided unanimous decision in the opener to do his part. And then Kovalev (32-3-1, 28 KOs), ahead on all three scorecards, appeared on his way to a similarly dominant win over Eleider “Storm” Alvarez (24-0, 12 KOs) until their careers — and boxing history — changed with one Alvarez right hand that slammed into Kovalev’s face late in the seventh round.

The punch dropped Kovalev and essentially ended the fight. Yes, Kovalev got up but he never recovered. He suffered two more knockdowns before referee David Fields called it off without a count at 2 minutes, 45 seconds.

Bivol is unlikely to get his wish, however. Kovalev has a rematch clause and though he may be done now as an elite fighter, there’s a good chance we’ll see the sequel.

“Knowing Sergey, he’ll definitely want to come back and avenge this loss,” said Main Events CEO Kathy Duva, Kovalev’s promoter. “But right now, after what just happened, it’s just too soon to say when that might be.”

Even if Kovalev, who didn’t address the media because he went to the hospital, doesn’t exercise his right to a rematch, Alvarez is unlikely to face Bivol next given the lack of public demand and money for the fight.

As disappointing as it is for many to see Kovalev-Bivol erased by one punch, it also finally ended any shred of hope for a fight between Kovalev and longtime champion Adonis Stevenson, a showdown that was once red-hot and one of the biggest in boxing. It was being built toward in 2013 and 2014 but then Stevenson ran out on an apparent agreement to go to rival Showtime.

Even through Stevenson’s inactivity and series of woeful mismatches since, and Kovalev’s two losses to Andre Ward, fans still held out hope for the fight. Now with Kovalev’s latest loss it’s dead and buried. Even if it ever did happen it no longer resembles the showdown it would have been. If you thought Floyd Mayweather-Manny Pacquiao was past its sell-by date by the time they finally got in the ring five years too late, Stevenson-Kovalev makes that one look fresh.

The loss of Kovalev fights with Stevenson and Bivol are just the latest examples of fights fans and media clamored for that didn’t happen because promoters, managers or fighters didn’t strike while the iron was hot, electing to either “marinate” the bout (Thank you, Bob Arum, for a term that will live in infamy!) or simply turn their backs on a dangerous match.

Since 2000, there are numerous examples of fights that were a thing that never happened. A few include Roy Jones Jr.-Dariusz Michalczewski, Kelly Pavlik-Arthur Abraham, Juan Manuel Lopez-Yuriorkis Gamboa (the fight for which Arum came up with his “marinate” line of defense), Nonito Donaire-Abner Mares and Timothy Bradley Jr.-Amir Khan. Now add to the list Stevenson-Kovalev and Kovalev-Bivol.

We’ll never know what would have happened in those never-to-be once in-demand fights. So a warning to those involved: Let’s hope the same doesn’t happen with two more fights the world awaits: Vasiliy Lomachenko-Mikey Garcia and Anthony Joshua-Deontay Wilder.

It would be shameful to have to add them to such an ignominious list, but it could happen if those fighters and their camps keep playing with fire by risking the big one.

Andre Berto overcomes a knockdown in the third round to defeat Devon Alexander for his first win in over two years.

What does former two-division titlist Devon Alexander have to do to get the nod?

In February, he decisively outboxed former welterweight titlist Victor Ortiz but was saddled with a draw in one of the year’s worst decision. On Saturday, in the main event of the Premier Boxing Champions card on Fox at the Nassau Veterans Memorial Coliseum in Uniondale, New York, Alexander was on the short end of a close decision to another former welterweight titlist, Andre Berto. This one won’t go down as a robbery like the Ortiz fight, but Alexander (27-5-1, 14 KOs), 31, of St. Louis, probably warranted the close call. However, Berto (32-5, 24 KOs), 34, of Winter Haven, Florida, got the split verdict, winning 115-112 on two scorecards while Alexander won 114-113 on the third.

Alexander banked many early rounds, including the 10-8 third when referee Ron Lipton credited him with a knockdown, though the punches were clearly behind Berto’s head and it shouldn’t have been ruled one. Nonetheless, Alexander, a southpaw, was ahead on all three cards through the sixth round. Berto, coming off a 16-month layoff since a knockout loss to Shawn Porter, mounted a nice comeback in the second half of the fight but it just didn’t seem to be quite enough to warrant the decision. But with the win, Berto, a well-known name, put himself back in the title hunt.

“I’ve been off for a while but it felt good in there. I felt like I was in better shape and quicker to the target than he was,” Berto said. “I knew he was going to be quick and I knew he’d come to fight. I just had to get adjusted to his speed a little bit and then I started pressing him. This is a tremendous feeling and I’m looking forward to getting in there and doing it again.”

Alexander was disappointed but was classy in defeat: “We knew that we had enough power to hurt him and I felt like I was doing that early in the fight. I slowed down in the middle of the fight but there’s no excuses. I thought I edged it out, but that’s my opinion. It was a close fight.”

Justice of the weekend

In December, Tevin Farmer was outright robbed of the decision challenging then-junior lightweight world titlist Kenichi Ogawa in Las Vegas, a fight that eventually was changed to a no contest and saw Ogawa stripped of the belt for a failed drug test.

On Friday, in Sydney, Australia — and live on ESPN+ — Farmer (26-4-1, 5 KOs), 28, a southpaw from Philadelphia, got justice, winning the vacant title he deserved in December as he soundly outpointed ex-featherweight titlist and hometown fighter Billy Dib (43-5, 24 KOs), 32, via scores of 120-107, 119-108 and 118-109. Farmer’s movement and jab troubled Dib throughout the fight. Farmer busted Dib up and dropped him with a left hand in the ninth round. It was such a dominating performance that at one point late in the fight Dib trainer Jeff Fenech was poised to throw in the towel. For a guy who began his career 7-4-1, Farmer has come an incredibly long way.

The next step: While Dib tearfully announced his retirement in the ring, Farmer, who wants a hometown defense, called for a unification fight with Gervonta Davis. Don’t count on it happening though.

Former middleweight titlist Quillin, 35, of New York, in only his second fight since a shocking first-round knockout loss to Daniel Jacobs in December 2015, soundly outpointed Love, 30, of Las Vegas, in the ho-hum co-feature of Berto-Alexander. Quillin won easily thanks to his activity and power, beating Love in front of his promoter, Floyd Mayweather.

In February, Lipinets lost his junior welterweight world title by clear decision to Mikey Garcia. Making his return, Lipinets, upset by not being invited to join the World Boxing Super Series junior welterweight tournament, moved up to welterweight and outpointed Bone with ease. Forget the draw scorecard from judge Robin Taylor. This was all Lipinets, who gave Bone a bloody nose early in the fight.

Browne, 27, a southpaw from Staten Island, New York, was supposed to be challenging Sergey Kovalev for a world title on Saturday but he was dumped from the bout because of a domestic violence arrest. So he wound up facing Castillo in a much lower-profile bout. Browne, a 2012 U.S. Olympian, suffered a knockdown on a right hand during an exchange in the fifth round but otherwise dominated Castillo, 29, of the Dominican Republic.

Former world titlist Collazo, 37, of Brooklyn, New York, returned from an 18-month layoff and left biceps surgery, to outpoint fellow southpaw Perrella, 29, of Fort Myers, Florida. The old veteran Collazo was aggressive throughout the bout, hurt Perrella in the third and fourth rounds and was in command all the way despite the one surprising draw scorecards.