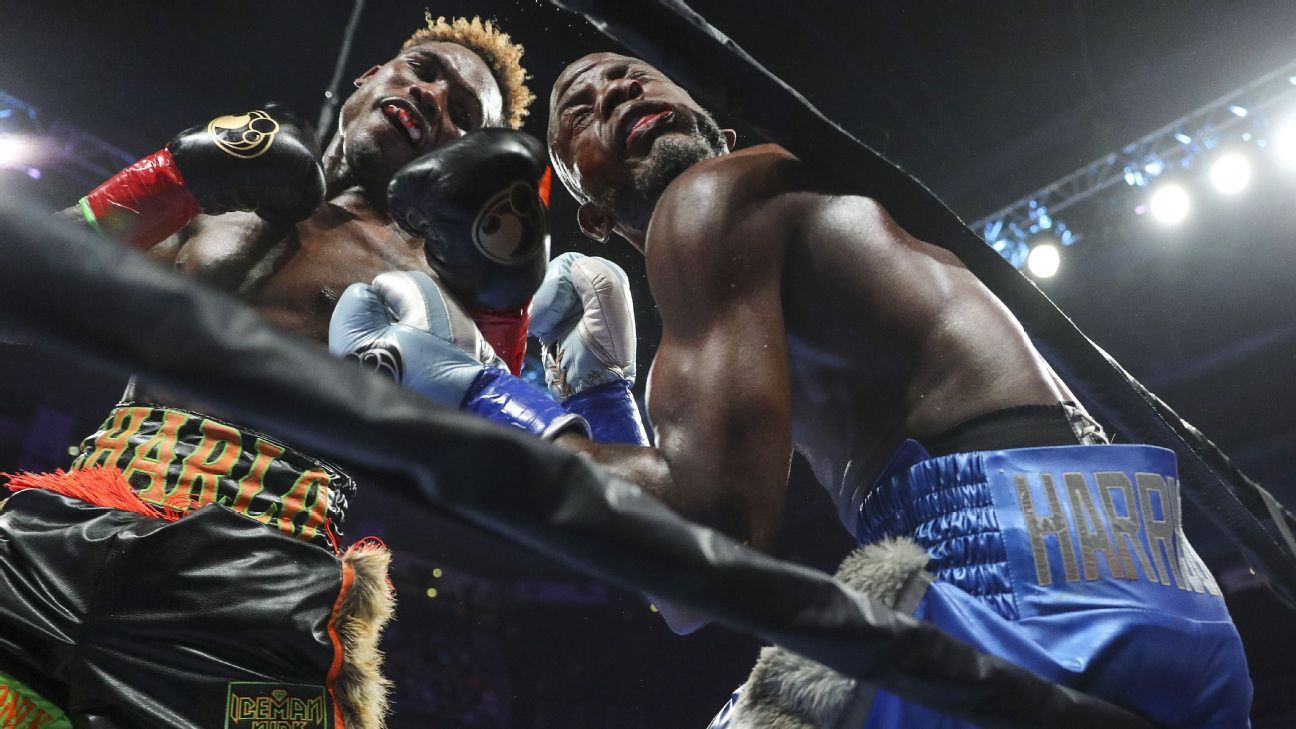 ONTARIO, California — Jermell Charlo regained his WBC junior middleweight title in dramatic fashion Saturday by stopping Tony Harrison in the 11th round of a hard-fought, competitive affair at Toyota Arena in Ontario, California.

“I got the belt back and I didn’t leave it up to the judges,” Charlo said. “Tony is a former champion. He had a lot on the line. I dominated and I knocked him out.”

Charlo (33-1, 17 KOs) lost this title to Harrison (28-3, 21 KOs) last year in what was his first professional defeat. It was a bitter experience for the boisterous native of Houston, who believed he was done wrong by the judges that night.

The rematch was an interesting contrast to their initial matchup, which saw Harrison move around the ring liberally, using his legs to navigate the perimeter of the ring. This time around, Harrison was much more willing to stand his ground and push Charlo back.

Although Charlo scored a second-round knockdown of Harrison from a left hook in a heated exchange, for the next few rounds, he was neutralized by the smooth boxing of Harrison, who also found success on the inside and was consistently beating Charlo to the body with the left hook. He showed for large segments of this fight that what took place last December was no fluke.

The second half of Saturday’s fight saw both boxers battle on mostly even terms. There was a certain tension in the air as it was clear that this contest was going to come down to the wire.

In the 11th round, with the fight hanging in the balance, Harrison — who had taunted Charlo a few times by gyrating his body to mock his punching power — was stunned by a left hook that eventually sent him down near Charlo’s corner. It was at this time that the momentum had clearly swung in Charlo’s direction. After taking the mandatory eight-count from referee Jack Reiss, Harrison was swarmed by a series of punches from a hard-charging Charlo. As he slumped to the canvas, Charlo, believing the fight had been waved off, climbed atop his corner rope in jubilation.

The only problem was that Reiss had allowed the fight to continue, despite Charlo’s celebrations and members of the California State Athletic Commission acting as if they thought the fight was over as well.

But Charlo would gather himself and home in on Harrison again. After one final barrage, the fight was called at 2 minutes, 28 seconds of the 11th.

“I started getting a little lax and got caught,” Harrison said afterward. “He earned it. I hate it, but he earned it. The game plan was to do a little boxing. But taking a year off, my body wasn’t used to it. He earned it and no excuses, I got caught slipping.”

It wasn’t easy, but Charlo is now a two-time world champion. And while Harrison might have earned his respect as a fighter, there are still some harsh feelings between the two.

Ajagba stops Kiladze in fifth round

In what was a memorable heavyweight slugfest, Efe Ajagba (12-0, 10 KOs) remained undefeated as he overcame the spirited effort of Iago Kiladze (26-5-1, 18 KOs), scoring a fifth-round stoppage in a bout that saw both fighters hit the deck.

There’s no doubting the power of Ajagba, who throws a heavy right hand as his weapon of choice. While both boxers were throwing right crosses, it was Ajagba whose salvos were shorter and more compact. In the second round, he sent Kiladze down with that particular punch to gain early control of the proceedings.

In the following round, he again staggered Kiladze, who wobbled on his feet but somehow stayed upright. As Ajagba went in to follow up, he was struck by a counter right hand that sent him to the floor. The crowd inside Toyota Arena was being treated to a modern-day version of George Foreman-Ron Lyle.

“When I got knocked down, I didn’t see the punch coming,” Ajagba said. “I tried to hit him with the left hook and that’s when I got caught.”

After a relatively subdued Round 4, Ajagba once again started to assert himself by coming forward, and it was another huge right hand that sent Kiladze to the canvas. To his credit, he was able to rise — bringing a loud ovation from the fans he had quickly won over with his show of heart — and gamely tried to fight on, even though Ajagba was overwhelming him.

His corner had seen enough, and threw in the towel at 2:09 of the fifth.

For Ajagba, it was a valuable learning experience.

“I made some mistakes, but I will go back to the gym and work on it,” he said. “I’ll do better next time.”

In a stunning upset, lightweight Rene Tellez Giron handed Karlos Balderas the first loss of his career by stopping him in six rounds. Balderas (9-1, 8 KOs), from Santa Maria, California, had represented the United States in the 2016 Olympics and was considered one of the sport’s best prospects coming out of the amateur ranks.

But on this night, he simply could not stop the left hook of Giron (14-1, 8 KOs), who was short in stature but more than willing to walk through the fast, flashy punches of Balderas to get inside. While not as skilled, Giron proved to be crafty in his own right, and he found ways to crank up his left hook consistently and land on Balderas, who often simply didn’t bring his right hand up enough to deflect that oncoming punch.

Late in the third, a blistering hook from Giron sent Balderas crashing to the canvas. Visibly dazed and disoriented, Balderas rose unsteadily to his feet. When asked by referee Ray Corona to walk toward him with his hands up, he instead staggered backward with his hands by his side to the neutral corner. Yet instead of waving the fight off, Corona allowed Balderas to be saved by the bell in a baffling ruling.

The next few rounds saw the two battle on relatively even terms until late in Round 6, when another left hook struck Balderas in the face and sent him to the floor for the second time. This time around, as he got to his feet, Corona decided he had seen enough and waved off the fight at 2:59 of the round.

“After I knocked him down in the third round, I saw his eyes were rolled back like he was hurt, but he has the heart of a lion,” Giron said. “He didn’t want to lose his undefeated record in front of his people. When he got up, I was like, ‘Wow! He got up! He’s up!’ So I kept on him and left everything in the ring.

“I’m really happy. Karlos had said he fought with the best and he was an Olympian. Well, I fought a lot of people, too, and you see the result.”