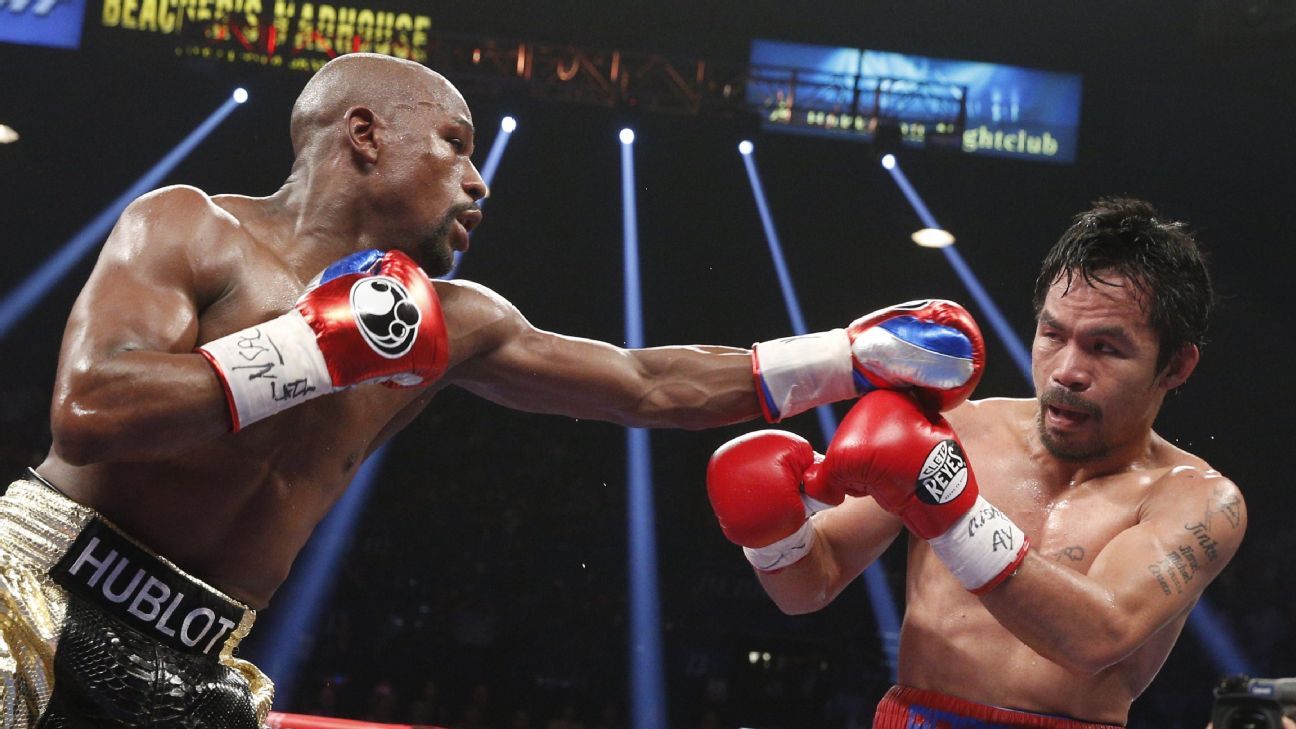 What can we expect for the next 12 months of boxing? Here are a few bold predictions for how the biggest stories in boxing will play out.

Floyd Mayweather will unretire: Mayweather, who turns 42 in February, will exit a nearly three-year retirement and fight once again as part of a promotional partnership with the UFC’s Dana White, who will use the event to serve as his entrance into boxing promotion. Mayweather will either opt for a rematch with Manny Pacquiao or face a top UFC star in a boxing match to add another nine-figure payday. — Dan Rafael

Floyd Mayweather-Pacquiao II will open up Allegiant Stadium: Yes, I do believe this rematch will happen in 2020 (and yes, I can hear your groans). But the truth of the matter is, as disappointing as their first chapter was, there will still be an enormous amount of interest in this second go-around. Especially with the 2019 campaign of Pacquiao, who downed Adrien Broner and Keith Thurman, as well as the intrigue of Mayweather coming back after not having a “real” boxing match since 2015.

For an event of this magnitude, Mayweather and the organizers of this event will want to do something historic and grab headlines. And what better message than staging this bout at the Allegiant Stadium, which is still under construction and starting next season will serve as the home for the Las Vegas Raiders of the NFL.

The $1.8 billion facility is expected to be completed by the end of July. Well, what better christening for this stadium than a huge prizefight? — Steve Kim

Deontay Wilder and Tyson Fury go their separate ways: Although the deal between heavyweight titlist and lineal champion Fury calls for two more bouts against each other, beginning with their rematch on Feb. 22, a third fight will not happen in 2020 as they go their separate ways for the time being. — Dan Rafael

Terence Crawford will move up in weight: Crawford, who is the current WBO welterweight world titleholder, is an elite fighter who currently needs marquee dance partners. The problem is that the overwhelming majority of the top 10 at 147 is aligned with PBC. So with that said, look for Crawford, who has already won titles at lightweight, junior welterweight and welterweight, to move up and go big game hunting at 154. — Steve Kim

Andre Ward will return: Ward won world tiles at super middleweight and light heavyweight and was one of the best pound-for-pound fighters in the world when he abruptly retired undefeated in late 2016 following his second win over Sergey Kovalev. But Ward, who will turn 36 in February, still has the competitive drive and he still is in great shape. He will leave his ringside seat as an ESPN analyst, at least briefly, to return to the ring for a big-money fight on ESPN PPV. — Dan Rafael

Canelo Alvarez vs. Gennadiy Golovkin 3 will happen: The third fight between bitter rivals Alvarez and Golovkin will finally happen, much to the delight of millions of boxing fans and DAZN, which has invested nearly $500 million into them in exclusive contracts but has so far been unable to get them back into the ring together. Alvarez, however, will change his tune and be willing to fight. But he won’t go back to middleweight. Instead, he will insist that Golovkin fight him in the super middleweight division, where Alvarez also has a belt. Golovkin, who tested the waters at 164 pounds in his June knockout of Steve Rolls, will happily accept. — Dan Rafael

Vasiliy Lomachenko will beat Teofimo Lopez: Lopez might produce a scare or two if he fights Lomachenko in what could be a memorable fight — but the Ukrainian should be too slippery and skilful to avoid an upset. Lomachenko’s friend Oleksandr Usyk, however, is a good bet to outpoint Anthony Joshua for the world heavyweight title should they meet late 2020. Joshua will beat Kubrat Pulev first in 2020, but Usyk’s movement, footwork and sharp boxing is a real threat to Joshua’s second reign, and any other world heavyweight titleholder. — Nick Parkinson

Win, lose or draw against Lopez, Lomachenko will have his last fight at 135: Lomachenko is considered the true champion in this division, as he holds the WBA and WBO titles (while also holding the illogical “franchise champion” designation from the WBC). Lopez just recently captured the IBF crown by blasting out Richard Commey on December 14th. They are set to meet in April, and regardless of who will eventually wear the WBC title (that is now vacant), this is ostensibly for the undisputed crown at 135.

And for the 31 year old Lomachenko, this will be his last bout as a lightweight before he moves back down to a more natural and comfortable 130 pounds, where there are very makeable fights against the likes of Miguel Berchelt, Jamel Herring and Oscar Valdez (who are all represented by Top Rank) awaiting him. Lomachenko is a tad small for lightweight and bouts with Jorge Linares, Jose Pedraza and Luke Campbell have taken a physical toll on the gifted Ukrainian

Moving forward, he will be back where he really belonged all along. — Steve Kim

There will be more joint pay-per-views in the 2020 beyond Wilder-Tyson Fury 2: ESPN and FOX are partnering up to bring the highly anticipated rematch between Wilder and Fury to pay-per-view event in February. Both networks will be utilizing their various platforms in hopes of producing the most amount of revenue for everyone involved.

Should this event do well over a million buys, it will be a win for everyone involved, including PBC and Top Rank. It will also lead to more co-promotions of this nature moving forward.

There are notable fights between boxers who are represented by Top Rank and PBC that would only happen on pay-per-view under co-promotions. Potential matchups such as Terence Crawford-Errol Spence Jr., Manny Pacquiao-Shawn Porter and Vasiliy Lomachenko-Gervonta Davis immediately come to mind in terms of fights that could occur in this scenario.

In the past, too many high caliber fights were not made because of network alliances and the political divides that have plagued the business of boxing.

Lightweight Ryan Garcia will win a world title: Garcia, the 2017 prospect of the year, will remain undefeated and that show that he is more than just a pretty face with a big social media following. The 21-year-old will win the fight Golden Boy is building to, against Jorge Linares and then will win a world title after that while also continuing to fill seats. — Dan Rafael

Andy Ruiz Jr. will be on top again: Ruiz will regain a piece of the heavyweight title and a boxer born in the U.S.A. will enter ESPN.com’s cruiserweight top 10. — Nigel Collins

Shakur Stevenson will be boxing’s next unified titleholder: Say whatever you want about Stevenson, but he is young and precocious. And the young man from Newark who recently won the WBO featherweight belt by defeating Joet Gonzalez in late October, may not have much time left at 126. So he wants to make his time in the division count and he has said he wants to face IBF belt-holder Josh Warrington, and he’ll do so in the U.K. if necessary. Stevenson has enough skill and craft to defeat the hard-charging Warrington and add another belt to his collection. — Steve Kim

2020 will be the last year in boxing for Sergey Kovalev: “The Krusher” has had a very good career, and in his last bout he made a career-high payday against Canelo. But the ending of that fight, which saw him knocked out decisively in the 11th round, showed that there has been a real price to pay. That was the third time he has been stopped since 2017. At 36 he might still have a fight or two left in him, but his punch resistance has been worn down to a nub, and it’s only a matter of time before another young lion gets to him. — Steve Kim

Gary Russell will be more active: Featherweight world titlist Russell has boxed just once time per calendar year since 2015. He is booked for his mandatory defense against Tugstsogt Nyambayar on Feb. 8 but it will not be his only ring appearance of the year. He will fight twice this year. — Dan Rafael

Edgar Berlanga will be the game most exciting prospect: There’s one thing you haven’t seen in any of Berlanga’s fights, thus far: “Round 2” signs. Because in 13 pro fights, he has not only scored 13 KOs, they have all come within the first round. He is a heavy handed puncher, and at just 22 years old, he is a prospect to keep an eye on. Yeah, you can argue that he’s been the beneficiary of matchmaking, but his power is staggering. Punchers are born, they are not made. — Steve Kim

Israil Madrimov will win a world title: Just 4-0 (4 KOs), Madrimov is part of an oncoming Uzbeki revolution in boxing that is based out of Indio, California under the direction of trainer Joel Diaz. “The Dream” began his career fighting in scheduled 10-rounders and his management has put him on the fast track. The 24 year old is one of the very best prospects in all of boxing and he’s poised to make a move. Currently Madrimov is rated sixth in the WBA, and his team will do everything they can to put him in a position to earn a title shot at junior welterweight. — Steve Kim

2020 Baseball Hall of Fame: Who did our voters pick?
Darvish now asks: Were Astros stealing off me?
Barnwell: 10 players and coaches who took a step toward Super Bowl redemption
Huskers’ Frost tabs Lubick new OC; Walters exits
Overexposed, sure, but Barty not feeling overwhelmed